The geo-tech engineer will set the broad requirements for each type of cut and the standard will be upheld by the foreman and the shift bosses. As the geo-tech if you get asked to look at something then go as soon as you can and if you are not sure then ask the shift boss for their views, they will help you out.

After rattling down the loose rocks with the jumbo, the ground support will be installed. Ground support consists of rock bolts, mesh and, or shotcrete. Using a combination of the 3, underground mines manage the different ground conditions encountered in the mine. There are 3 types of bolts that are used in an underground mine, these are Split Sets, Chemical Bolts and Cable Bolts.

Split Set bolts come in different lengths (1m, 1.8m, 3m), are round with a strip of metal missing up the side. They are tapered at one end, with a full ring at the other, which holds a metal plate about 30cm x 20cm, all have the same diameter (around 60mm).

The bolt with plate is loaded onto the jumbo boom then pushed into a predrilled hole, the bolt works by squishing the metal into the smaller diameter hole (no bigger than 43mm) and holds about 3 ton of ground. 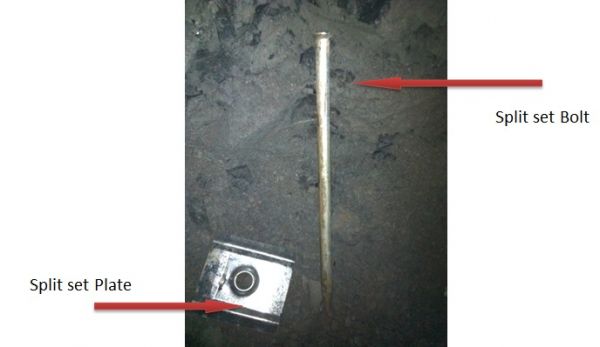 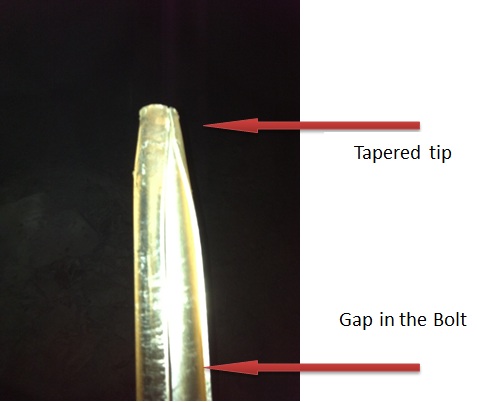 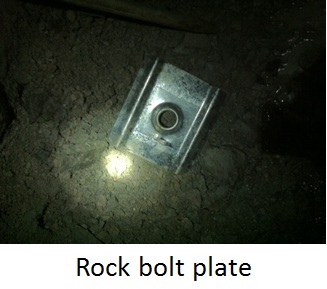 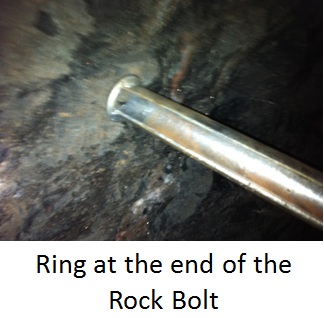 The rows are installed 1.5 metres apart and go all the way to the end of the drive. If there are no bolts in place then this is classed as unsupported ground, never ever go under unsupported ground for any reason. 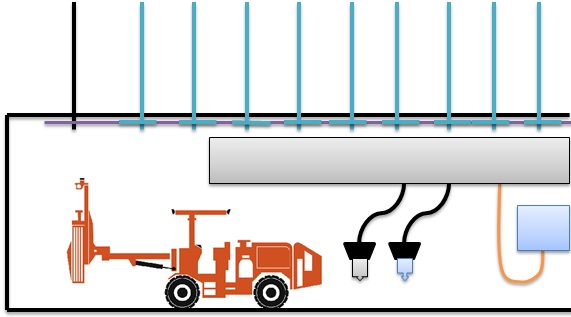 Mesh is used against the rock to hold smaller rocks in place and hold areas of subsidence. The idea is that if something falls then the mesh will catch it only letting the smallest of rocks through. Mesh is pinned to the backs (roof) using the bolts to pin the mesh in place. This work is carried out by a twin boom Jumbo. 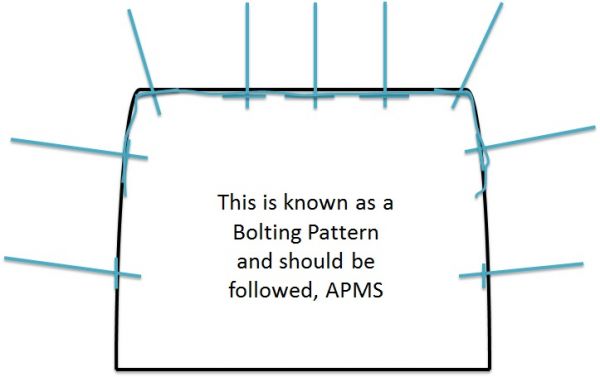 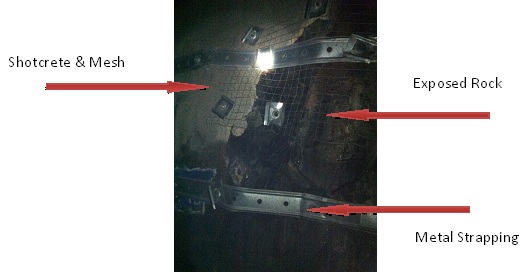 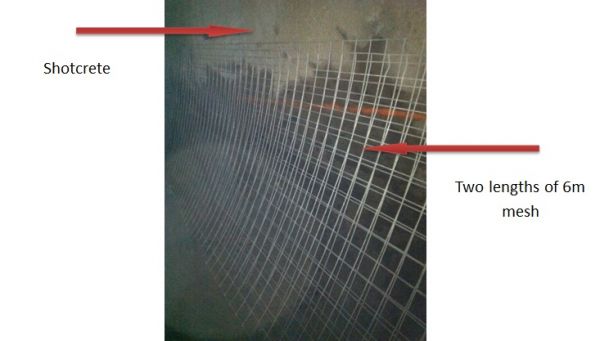 Shotcrete is used to reduce the chances of any rock falling, it does this by covering the exposed rock with a mixture of concrete, small plastic covered strips of metal and chemicals to speed up setting time. This forms shotcrete and is sprayed on to a thickness of 50mm. Once set, this forms a protective shell that is then bolted. You can see examples of shotcrete on roadways and in tunnels. 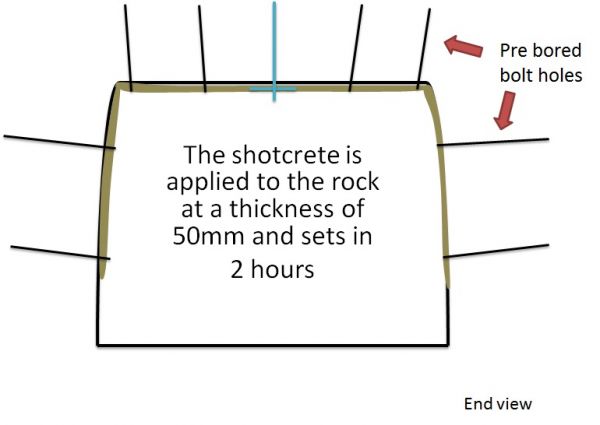 Did you spot the safety problems? That’s right he’s not wearing gloves or glasses. Please make sure you wear your PPE. 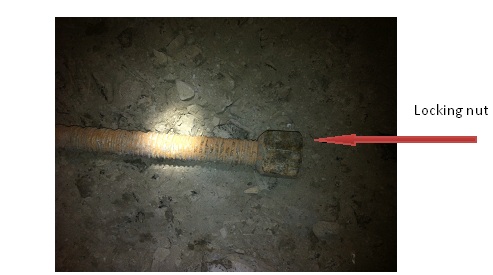 The bolt is solid and spiralled like a masonry bit to mix the chemical as the bolt is installed. 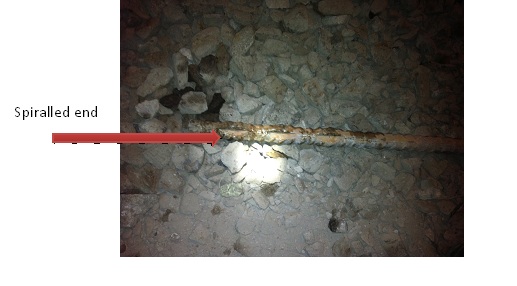 These bolts are classed as long term ground support and hold up to 7 tonnes of ground per bolt, these bolts are mainly used in the decline. 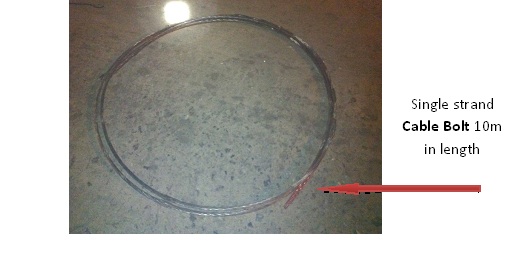 A cable bolt is stranded steel wire that is fed into a pre-drilled hole that can be up to 30m or more long. This is done using either single or multiple stranded cables that are then secured into place with grout and left to set for 12 hours

After this time the cable can be plated and tensioned. These are the same bolts that are used to anchor open pit walls, high rise buildings to the ground and hold up the hillsides that motorways are cut through. In an underground mine they are used in spans larger than 6m such as intersections as the bolting plan below shows. Cable bolts can hold in excess of 20 tonnes. 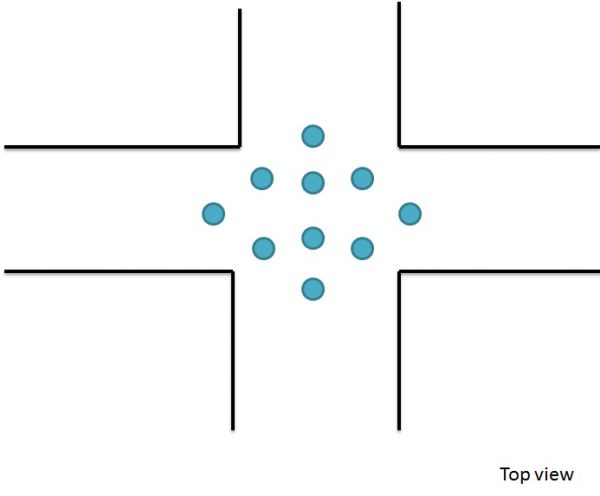 The above picture is an intersection or X cut as the miners call it. Each blue dot represents a cable bolt so if the cable bolts are 8m long each the cable bolts are holding up 160 ton. The deeper we go into the earth, the more levels we go down and it is for this reason that the industry uses a numbering system that is determined on the meterage above or below sea level. The distance between levels will be around 20m, so as you go down the decline the levels will be numbered 780, 760, 740, 720 and so on.